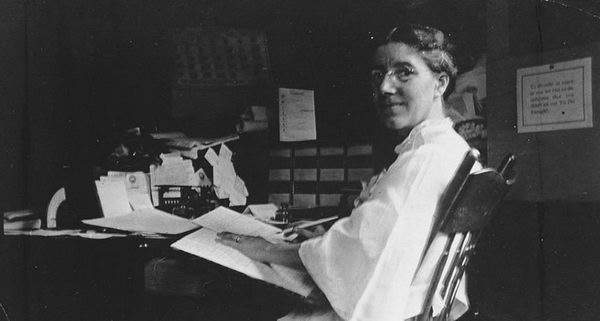 Charlotte Perkins Gilman (July 3, 1860–August 17, 1935) was an American novelist and humanist. She was an outspoken lecturer, passionate about social reform, and notable for her views as a utopian feminist.

Charlotte Perkins Gilman was born in Hartford, Connecticut, in 1860. Her father left the family not long after she was born, leaving her mother Mary to raise Charlotte and her brother alone. As a single mother, Mary worked many jobs and often relied on family to help with her young children. The family moved often and Charlotte’s education was neglected. However, Charlotte worked to finance her own education and supported herself by selling paintings and watercolors to complete her education.

In the late 1800s and early 1900s, Gilman became a social activist and writer. She was a feminist who encouraged women to become financially independent, and she became a well-known social theorist.

In 1884, Gilman married Charles Stetson. She had their daughter Katherine the next year. Following the birth of their daughter, Gilman suffered from postpartum depression. The illness was not well known at the time, and many women who suffered from it were seen as fragile or simply needing more rest. Gilman’s depression grew as she worried about losing her career to motherhood. She was ordered into rest therapy, a popular treatment at the time. Gilman was required to rest for long periods and not to think about her career. Eventually, she realized that it was her married life that depressed her and she left her husband, something that was very uncommon for the time period.

Not long after she left her husband, Gilman sent their daughter Katherine to live with Charles and his new wife (who was her best friend). Gilman was criticized not just by the pubic, but also later by her daughter. Gilman herself also expressed her disappointment that she could not be the mother that she wanted to be, but her goals to be a writer and activist were stronger than her desire for a traditional marriage.

Eventually, Charlotte did remarry to George Gilman, but her new husband was very supportive of her career and writing. Throughout the early 1900s, Gilman began her own magazine and published her autobiography. She also continued to lecture to women, emphasizing her earlier messages of economic independence and rejection of traditional marriage and motherhood. In 1934, her husband passed away and she was diagnosed with breast cancer. In 1935, Gilman committed suicide via chloroform.