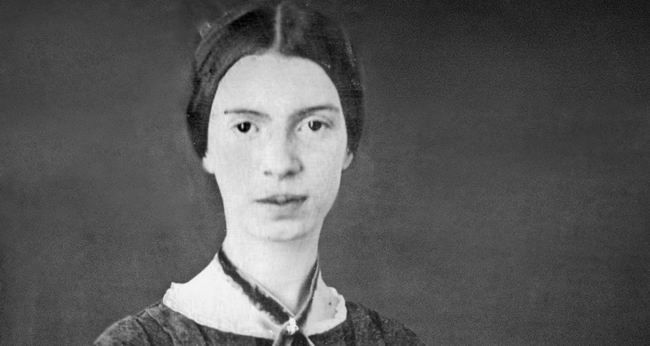 Emily Dickinson attended Mount Holyoke Female Seminary in South Hadley, but only for one year. Throughout her life, she seldom left her home and visitors were few. The people with whom she did come in contact, however, had an enormous impact on her poetry. She was particularly stirred by the Reverend Charles Wadsworth, whom she first met on a trip to Philadelphia. He left for the West Coast shortly after a visit to her home in 1860, and some critics believe his departure gave rise to the heartsick flow of verse from Dickinson in the years that followed. While it is certain that he was an important figure in her life, it is not clear that their relationship was romantic—she called him “my closest earthly friend.” Other possibilities for the unrequited love that was the subject of many of Dickinson’s poems include Otis P. Lord, a Massachusetts Supreme Court judge, and Samuel Bowles, editor of the Springfield Republican.

By the 1860s, Dickinson lived in almost complete isolation from the outside world, but actively maintained many correspondences and read widely. She spent a great deal of this time with her family. Her father, Edward Dickinson, was actively involved in state and national politics, serving in Congress for one term. Her brother, Austin, who attended law school and became an attorney, lived next door with his wife, Susan Gilbert. Dickinson’s younger sister, Lavinia, also lived at home for her entire life in similar isolation. Lavinia and Austin were not only family, but intellectual companions for Dickinson during her lifetime.

Dickinson’s poetry was heavily influenced by the Metaphysical poets of seventeenth-century England, as well as her reading of the Book of Revelation and her upbringing in a Puritan New England town, which encouraged a Calvinist, orthodox, and conservative approach to Christianity.

She admired the poetry of Robert and Elizabeth Barrett Browning, as well as John Keats. Though she was dissuaded from reading the verse of her contemporary Walt Whitman by rumors of its disgracefulness, the two poets are now connected by the distinguished place they hold as the founders of a uniquely American poetic voice. While Dickinson was extremely prolific as a poet and regularly enclosed poems in letters to friends, she was not publicly recognized during her lifetime. The first volume of her work was published posthumously in 1890 and the last in 1955. She died in Amherst in 1886.

Upon her death, Dickinson’s family discovered forty handbound volumes of nearly 1,800 poems, or “fascicles” as they are sometimes called. Dickinson assembled these booklets by folding and sewing five or six sheets of stationery paper and copying what seem to be final versions of poems. The handwritten poems show a variety of dash-like marks of various sizes and directions (some are even vertical). The poems were initially unbound and published according to the aesthetics of her many early editors, who removed her unusual and varied dashes, replacing them with traditional punctuation. The current standard version of her poems replaces her dashes with an en-dash, which is a closer typographical approximation to her intention. The original order of the poems was not restored until 1981, when Ralph W. Franklin used the physical evidence of the paper itself to restore her intended order, relying on smudge marks, needle punctures, and other clues to reassemble the packets. Since then, many critics have argued that there is a thematic unity in these small collections, rather than their order being simply chronological or convenient. The Manuscript Books of Emily Dickinson (Belknap Press, 1981) is the only volume that keeps the order intact.