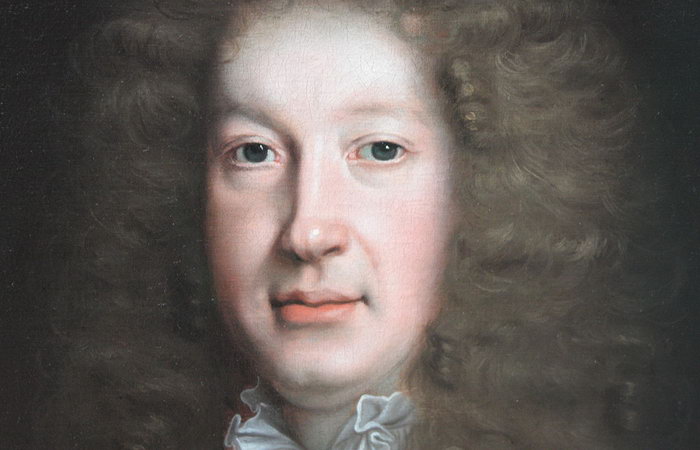 Born in Northamptonshire, England, on August 9, 1631, John Dryden came from a landowning family with connections to Parliament and the Church of England. He studied as a King’s Scholar at the prestigious Westminster School of London, where he later sent two of his own children. There, Dryden was trained in the art of rhetorical argument, which remained a strong influence on the poet’s writing and critical thought throughout his life.

Dryden published his first poem in 1649. He enrolled at Trinity College in Cambridge the following year, where he likely studied the classics, rhetoric, and mathematics. He obtained his BA in 1654, graduating first in his class. In June of that year, Dryden’s father died.

In 1660, Dryden celebrated the regime of King Charles II with Astraea Redux, a royalist panegyric in praise of the new king. In that poem, Dryden apologizes for his allegiance with the Cromwellian government. Though Samuel Johnson excused Dryden for this, writing in his Lives of the Poets (1779) that “if he changed, he changed with the nation,” he also notes that the earlier work was “not totally forgotten” and in fact “rased him enemies.”

Despite this, Dryden quickly established himself after the Restoration as the leading poet and literary critic of his day. He published To His Sacred Majesty: A Panegyric on his Coronation (1662), and To My Lord Chancellor (1662), possibly to court aristocratic patrons. That year, Dryden was proposed for membership in the Royal Society, and was elected an early fellow. In 1663, he married Lady Elizabeth, the royalist sister of Sir Robert Howard.

Following the death of William Davenant in April 1668, Dryden became the first official Poet Laureate of England, conferred by a letters patent from the king. The royal office carried the responsibility of composing occasional works in celebration of public events. Dryden, having exhibited that particular dexterity with his earlier panegyrics, was a natural choice. Though the position was most often held for life (until 1999), Dryden was the lone exception. He was dismissed by William III and Mary II in 1688 after he refused to swear an oath of allegiance, remaining loyal to James II.

As a playwright, Dryden published The Wild Gallant in 1663. Though it was not financially successful, he was commissioned to produce three plays for the King’s Company, in which he later became a shareholder. His best known dramatic works are Marriage á la Mode (1672) and All for Love (1678), which was written in blank verse.

When the bubonic plague swept through London in 1665, Dryden moved to Wiltshire where he wrote Of Dramatick Poesie (1668). The longest of his critical works, the piece takes the form of a dialogue among characters debating and defending international dramatic works and practices. In 1678, Dryden wrote Mac Flecknoe (1682), a work of satiric verse attacking Thomas Shadwell, one of Dryden’s prominent contemporaries, for his “offenses against literature.” Other works of satire, a genre for which Dryden has received significant praise, include Absalom and Achitophel (1681) and The Medal (1682).

Though his early work was reminiscent of the late metaphysical work of Abraham Cowley, Dryden developed a style closer to natural speech which remained the dominant poetic mode for more than a century. He is credited with standardizing the heroic couplet in English poetry by applying it as a convention in a range of works, including satires, religious pieces, fables, epigrams, prologues, and plays.

Dryden died on May 1, 1700, and was initially buried in St. Anne’s Cemetery. In 1710, he was moved to the Poets’ Corner of Westminster Abbey, where a memorial has been erected.