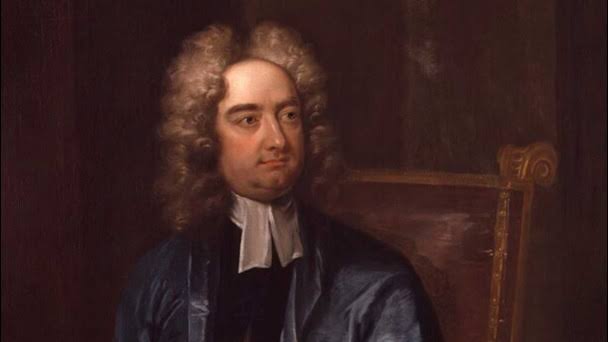 Jonathan Swift (30 November 1667 – 19 October 1745) was an Anglo-Irish satirist, essayist, political pamphleteer (first for the Whigs, then for the Tories), poet and cleric who becameDean of St Patrick’s Cathedral, Dublin.

Swift is remembered for works such as Gulliver’s Travels, A Modest Proposal, A Journal to Stella, Drapier’s Letters, The Battle of the Books, An Argument Against Abolishing Christianity and A Tale of a Tub. He is regarded by the Encyclopædia Britannica as the foremost prose satirist in the English language, and is less well known for his poetry. He originally published all of his works under pseudonyms – such as Lemuel Gulliver, Isaac Bickerstaff, MB Drapier – or anonymously. He is also known for being a master of two styles of satire, the Horatian and Juvenalian styles.

Gulliver’s Travels, a large portion of which Swift wrote at Woodbrook House in County Laois, was published in 1726. It is regarded as his masterpiece. As with his other writings, the Travels was published under a pseudonym, the fictional Lemuel Gulliver, a ship’s surgeon and later a sea captain. Some of the correspondence between printer Benj. Motte and Gulliver’s also-fictional cousin negotiating the book’s publication has survived. Though it has often been mistakenly thought of and published in bowdlerised form as a children’s book, it is a great and sophisticated satire of human nature based on Swift’s experience of his times. Gulliver’s Travels is an anatomy of human nature, a sardonic looking-glass, often criticised for its apparent misanthropy. It asks its readers to refute it, to deny that it has adequately characterised human nature and society. Each of the four books—recounting four voyages to mostly fictional exotic lands—has a different theme, but all are attempts to deflate human pride. Critics hail the work as a satiric reflection on the shortcomings of Enlightenment thought.