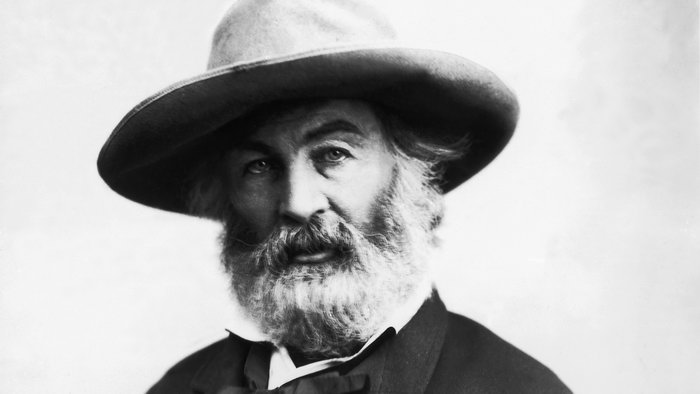 Walt Whitman was born on May 31, 1819, the second son of Walter Whitman, a housebuilder, and Louisa Van Velsor. The family, which consisted of nine children, lived in Brooklyn and Long Island in the 1820s and 1830s.

At the age of twelve, Whitman began to learn the printer’s trade, and fell in love with the written word. Largely self-taught, he read voraciously, becoming acquainted with the works of Homer, Dante, Shakespeare, and the Bible.

Whitman worked as a printer in New York City until a devastating fire in the printing district demolished the industry. In 1836, at the age of seventeen, he began his career as teacher in the one-room school houses of Long Island. He continued to teach until 1841, when he turned to journalism as a full-time career.

He founded a weekly newspaper, Long-Islander, and later edited a number of Brooklyn and New York papers. In 1848, Whitman left the Brooklyn Daily Eagle to become editor of the New Orleans Crescent. It was in New Orleans that he experienced firsthand the viciousness of slavery in the slave markets of that city. On his return to Brooklyn in the fall of 1848, he founded a “free soil” newspaper, the Brooklyn Freeman, and continued to develop the unique style of poetry that later so astonished Ralph Waldo Emerson.

In 1855, Whitman took out a copyright on the first edition of Leaves of Grass, which consisted of twelve untitled poems and a preface. He published the volume himself, and sent a copy to Emerson in July of 1855. Whitman released a second edition of the book in 1856, containing thirty-three poems, a letter from Emerson praising the first edition, and a long open letter by Whitman in response. During his lifetime, Whitman continued to refine the volume, publishing several more editions of the book. Noted Whitman scholar, M. Jimmie Killingsworth writes that “the ‘merge,’ as Whitman conceived it, is the tendency of the individual self to overcome moral, psychological, and political boundaries. Thematically and poetically, the notion dominates the three major poems of 1855: ‘I Sing the Body Electric,’ ‘The Sleepers,’ and ‘Song of Myself,’ all of which were ‘merged’ in the first edition under the single title Leaves of Grass but were demarcated by clear breaks in the text and the repetition of the title.”

At the outbreak of the Civil War, Whitman vowed to live a “purged” and “cleansed” life. He worked as a freelance journalist and visited the wounded at New York City–area hospitals. He then traveled to Washington, D. C. in December 1862 to care for his brother who had been wounded in the war.

Overcome by the suffering of the many wounded in Washington, Whitman decided to stay and work in the hospitals and stayed in the city for eleven years. He took a job as a clerk for the Department of the Interior, which ended when the Secretary of the Interior, James Harlan, discovered that Whitman was the author of Leaves of Grass, which Harlan found offensive. Harlan fired the poet.

Whitman struggled to support himself through most of his life. In Washington, he lived on a clerk’s salary and modest royalties, and spent any excess money, including gifts from friends, to buy supplies for the patients he nursed. He had also been sending money to his widowed mother and an invalid brother. From time to time writers both in the states and in England sent him “purses” of money so that he could get by.

In the early 1870s, Whitman settled in Camden, New Jersey, where he had come to visit his dying mother at his brother’s house. However, after suffering a stroke, Whitman found it impossible to return to Washington. He stayed with his brother until the 1882 publication of Leaves of Grass (James R. Osgood) gave Whitman enough money to buy a home in Camden.

In the simple two-story clapboard house, Whitman spent his declining years working on additions and revisions to a new edition of the book and preparing his final volume of poems and prose, Good-Bye, My Fancy (David McKay, 1891). After his death on March 26, 1892, Whitman was buried in a tomb he designed and had built on a lot in Harleigh Cemetery.

Along with Emily Dickinson, he is considered one of America’s most important poets.