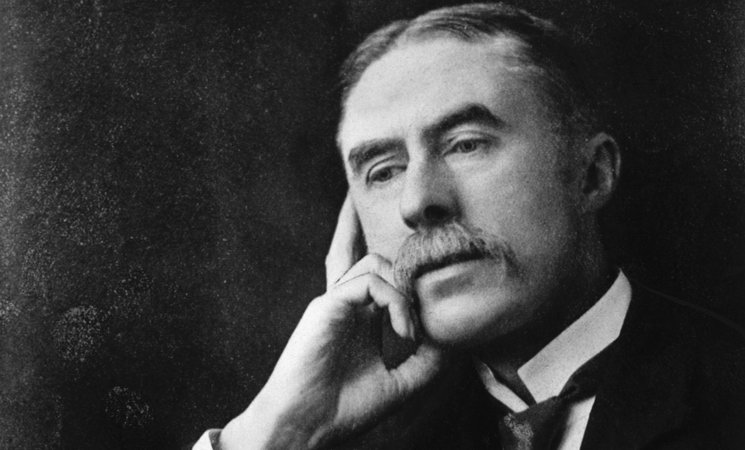 Alfred Edward Housman was born in Fockbury, Worcestershire, England, on March 26, 1859, the eldest of seven children. A year after his birth, Housman’s family moved to nearby Bromsgrove, where the poet grew up and had his early education. In 1877, he attended St. John’s College, Oxford and received first class honours in classical moderations.

Housman became distracted, however, when he fell in love with his heterosexual roommate Moses Jackson. He unexpectedly failed his final exams, but managed to pass the final year and later took a position as clerk in the Patent Office in London for ten years.

During this time he studied Greek and Roman classics intensively, and in 1892 was appointed professor of Latin at University College, London. In 1911 he became professor of Latin at Trinity College, Cambridge, a post he held until his death. As a classicist, Housman gained renown for his editions of the Roman poets Juvenal, Lucan, and Manilius, as well as his meticulous and intelligent commentaries and his disdain for the unscholarly.

Housman only published two volumes of poetry during his life: A Shropshire Lad (1896) and Last Poems (1922). The majority of the poems in A Shropshire Lad, his cycle of 63 poems, were written after the death of Adalbert Jackson, Housman’s friend and companion, in 1892. These poems center around themes of pastoral beauty, unrequited love, fleeting youth, grief, death, and the patriotism of the common soldier. After the manuscript had been turned down by several publishers, Housman decided to publish it at his own expense, much to the surprise of his colleagues and students.

While A Shropshire Lad was slow to gain in popularity, the advent of war, first in the Boer War and then in World War I, gave the book widespread appeal due to its nostalgic depiction of brave English soldiers. Several composers created musical settings for Housman’s work, deepening his popularity.

Housman continued to focus on his teaching, but in the early 1920s, when his old friend Moses Jackson was dying, Housman chose to assemble his best unpublished poems so that Jackson might read them. These later poems, most of them written before 1910, exhibit a range of subject and form much greater than the talents displayed in A Shropshire Lad. When Last Poems was published in 1922, it was an immediate success.

A third volume, More Poems, was released posthumously in 1936 by his brother, Laurence, as was an edition of Housman’s Complete Poems (1939).

Despite acclaim as a scholar and a poet in his lifetime, Housman lived as a recluse, rejecting honors and avoiding the public eye. He died on April 30, 1936, in Cambridge.