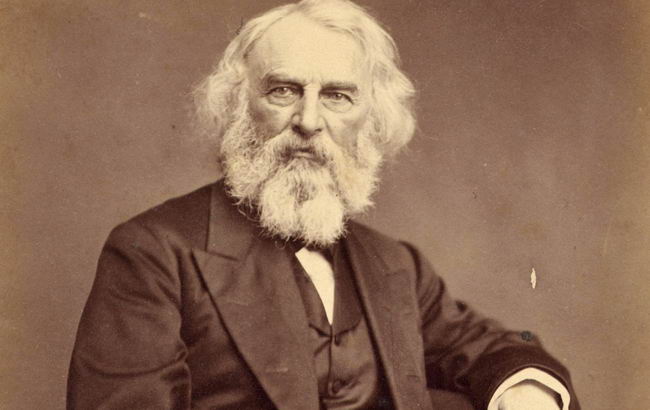 Henry Wadsworth Longfellow was born in Portland, Maine—then still part of Massachusetts—on February 27, 1807, the second son in a family of eight children. His mother, Zilpah Wadsworth, was the daughter of a Revolutionary War hero. His father, Stephen Longfellow, was a prominent Portland lawyer and later a member of Congress.

Henry was a dreamy boy who loved to read. He heard sailors speaking Spanish, French and German in the Portland streets and liked stories set in foreign places: The Arabian Nights, Robinson Crusoe, and the plays of Shakespeare.

After graduating from Bowdoin College, Longfellow studied modern languages in Europe for three years, then returned to Bowdoin to teach them. In 1831 he married Mary Storer Potter of Portland, a former classmate, and soon published his first book, a description of his travels called Outre Mer (“Overseas”). But in November 1835, during a second trip to Europe, Longfellow’s life was shaken when his wife died during a miscarriage. The young teacher spent a grief-stricken year in Germany and Switzerland.

Longfellow took a position at Harvard in 1836. Three years later, at the age of thirty-two, he published his first collection of poems, Voices of the Night, followed in 1841 by Ballads and Other Poems. Many of these poems (“A Psalm of Life,” for example) showed people triumphing over adversity, and in a struggling young nation that theme was inspiring. Both books were very popular, but Longfellow’s growing duties as a professor left him little time to write more. In addition, Frances Appleton, a young woman from Boston, had refused his proposal of marriage.

Frances finally accepted his proposal the following spring, ushering in the happiest eighteen years of Longfellow’s life. The couple had six children, five of whom lived to adulthood, and the marriage gave him new confidence. In 1847, he published Evangeline, a book-length poem about what would now be called “ethnic cleansing.” The poem takes place as the British drive the French from Nova Scotia, and two lovers are parted, only to find each other years later when the man is about to die.

In 1854, Longfellow decided to quit teaching to devote all his time to poetry. He published Hiawatha, a long poem about Native American life, and The Courtship of Miles Standish and Other Poems. Both books were immensely successful, but Longfellow was now preoccupied with national events. With the country moving toward civil war, he wrote “Paul Revere’s Ride,” a call for courage in the coming conflict.

A few months after the war began in 1861, Frances Longfellow was sealing an envelope with wax when her dress caught fire. Despite her husband’s desperate attempts to save her, she died the next day. Profoundly saddened, Longfellow published nothing for the next two years. He found comfort in his family and in reading Dante’s Divine Comedy. (Later, he produced its first American translation.) Tales of a Wayside Inn,<> largely written before his wife’s death, was published in 1863.

When the Civil War ended in 1865, the poet was fifty-eight. His most important work was finished, but his fame kept growing. In London alone, twenty-four different companies were publishing his work. His poems were popular throughout the English-speaking world, and they were widely translated, making him the most famous American of his day. His admirers included Abraham Lincoln, Charles Dickens, and Charles Baudelaire.

From 1866 to 1880, Longfellow published seven more books of poetry, and his seventy-fifth birthday in 1882 was celebrated across the country. But his health was failing, and he died the following month, on March 24. When Walt Whitman heard of the poet’s death, he wrote that, while Longfellow’s work “brings nothing offensive or new, does not deal hard blows,” he was the sort of bard most needed in a materialistic age: “He comes as the poet of melancholy, courtesy, deference—poet of all sympathetic gentleness—and universal poet of women and young people. I should have to think long if I were ask’d to name the man who has done more and in more valuable directions, for America.”