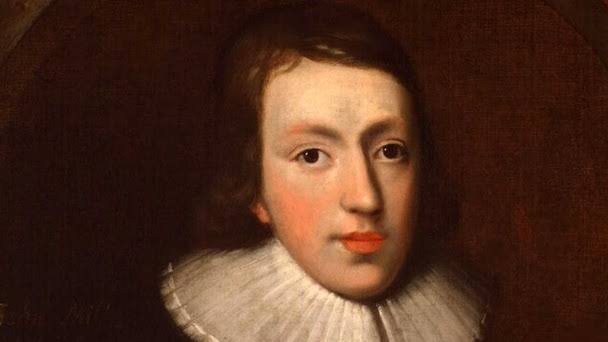 John Milton was born in London on December 9, 1608, into a middle-class family. He was educated at St. Paul’s School, then at Christ’s College, Cambridge, where he began to write poetry in Latin, Italian, and English, and prepared to enter the clergy.

After university, however, he abandoned his plans to join the priesthood and spent the next six years in his father’s country home in Buckinghamshire following a rigorous course of independent study to prepare for a career as a poet. His extensive reading included both classical and modern works of religion, science, philosophy, history, politics, and literature. In addition, Milton was proficient in Latin, Greek, Hebrew, French, Spanish, and Italian, and obtained a familiarity with Old English and Dutch as well.

During his period of private study, Milton composed a number of poems, including “On the Morning of Christ’s Nativity,” “On Shakespeare,” “L’Allegro,” “Il Penseroso,” and the pastoral elegy “Lycidas.” In May of 1638, Milton began a 13-month tour of France and Italy, during which he met many important intellectuals and influential people, including the astronomer Galileo, who appears in Milton’s tract against censorship, “Areopagitica.”

In 1642, Milton returned from a trip into the countryside with a 16-year-old bride, Mary Powell. Even though they were estranged for most of their marriage, she bore him three daughters and a son before her death in 1652. Milton later married twice more: Katherine Woodcock in 1656, who died giving birth in 1658, and Elizabeth Minshull in 1662.

During the English Civil War, Milton championed the cause of the Puritans and Oliver Cromwell, and wrote a series of pamphlets advocating radical political topics including the morality of divorce, the freedom of the press, populism, and sanctioned regicide. Milton served as secretary for foreign languages in Cromwell’s government, composing official statements defending the Commonwealth. During this time, Milton steadily lost his eyesight, and was completely blind by 1651. He continued his duties, however, with the aid of Andrew Marvell and other assistants.

After the Restoration of Charles II to the throne in 1660, Milton was arrested as a defender of the Commonwealth, fined, and soon released. He lived the rest of his life in seclusion in the country, completing the blank-verse epic poem Paradise Lost in 1667, as well as its sequel Paradise Regained and the tragedy Samson Agonistes both in 1671. Milton oversaw the printing of a second edition of Paradise Lost in 1674, which included an explanation of “why the poem rhymes not,” clarifying his use of blank verse, along with introductory notes by Marvell. He died shortly afterwards, on November 8, 1674, in Buckinghamshire, England.

Paradise Lost, which chronicles Satan’s temptation of Adam and Eve and their expulsion from Eden, is widely regarded as his masterpiece and one of the greatest epic poems in world literature. Since its first publication, the work has continually elicited debate regarding its theological themes, political commentary, and its depiction of the fallen angel Satan who is often viewed as the protagonist of the work.

The epic has had wide-reaching effect, inspiring other long poems, such as Alexander Pope‘s The Rape of the Lock, William Wordsworth‘s The Prelude and John Keats‘s Endymion, as well as Mary Shelley’s novel Frankenstein, and deeply influencing the work of Percy Bysshe Shelley and William Blake, who illustrated an edition of the epic.