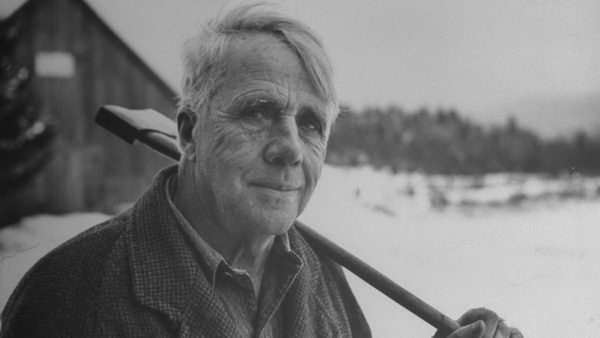 Robert Frost was born on March 26, 1874, in San Francisco, where his father, William Prescott Frost Jr., and his mother, Isabelle Moodie, had moved from Pennsylvania shortly after marrying. After the death of his father from tuberculosis when Frost was eleven years old, he moved with his mother and sister, Jeanie, who was two years younger, to Lawrence, Massachusetts. He became interested in reading and writing poetry during his high school years in Lawrence, enrolled at Dartmouth College in Hanover, New Hampshire, in 1892, and later at Harvard University in Boston, though he never earned a formal college degree.

Frost drifted through a string of occupations after leaving school, working as a teacher, cobbler, and editor of the Lawrence Sentinel. His first published poem, “My Butterfly,” appeared on November 8, 1894, in the New York newspaper The Independent.

In 1895, Frost married Elinor Miriam White, whom he’d shared valedictorian honors with in high school and who was a major inspiration for his poetry until her death in 1938. The couple moved to England in 1912, after they tried and failed at farming in New Hampshire. It was abroad that Frost met and was influenced by such contemporary British poets as Edward Thomas, Rupert Brooke, and Robert Graves. While in England, Frost also established a friendship with the poet Ezra Pound, who helped to promote and publish his work.

Though his work is principally associated with the life and landscape of New England—and though he was a poet of traditional verse forms and metrics who remained steadfastly aloof from the poetic movements and fashions of his time—Frost is anything but merely a regional poet. The author of searching and often dark meditations on universal themes, he is a quintessentially modern poet in his adherence to language as it is actually spoken, in the psychological complexity of his portraits, and in the degree to which his work is infused with layers of ambiguity and irony.

In a 1970 review of The Poetry of Robert Frost, the poet Daniel Hoffman describes Frost’s early work as “the Puritan ethic turned astonishingly lyrical and enabled to say out loud the sources of its own delight in the world,” and comments on Frost’s career as the “American Bard”: “He became a national celebrity, our nearly official poet laureate, and a great performer in the tradition of that earlier master of the literary vernacular, Mark Twain.”

About Frost, President John F. Kennedy, at whose inauguration the poet delivered a poem, said, “He has bequeathed his nation a body of imperishable verse from which Americans will forever gain joy and understanding.”

Robert Frost lived and taught for many years in Massachusetts and Vermont, and died in Boston on January 29, 1963.