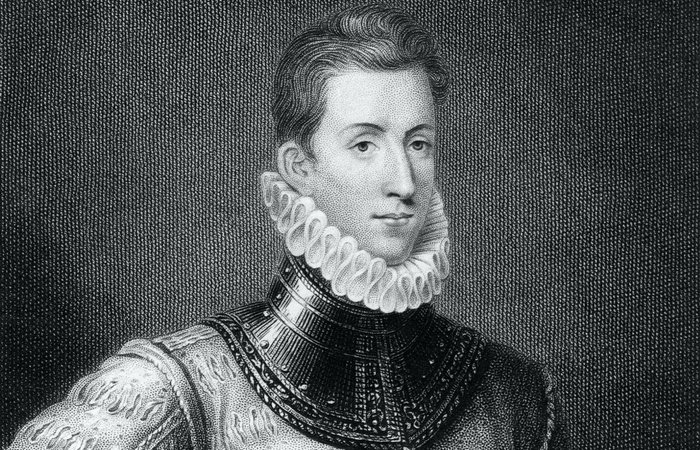 Sir Philip Sidney was born on November 30, 1554, in Kent, England. His father, Sir Henry Sidney, was the lord president of Wales, and his uncle, Robert Dudley, was the Earl of Leicester and Queen Elizabeth’s friend and advisor. Sidney attended Oxford University’s Christ Church College from 1568 to 1571, but he left to travel Europe before completing his studies.

Sidney returned to England in 1575 and was appointed cupbearer to Queen Elizabeth, a prestigious position. In 1577, he was sent to Germany as an ambassador, and when he returned to England soon after, he became a patron of the arts, notably encouraging the poet Edmund Spenser. He also continued his involvement in politics, opposing the queen’s planned marriage to the French heir and serving as a Member of Parliament in the early 1580s.

Sidney penned several major works of the Elizabethan era, including Astrophel and Stella, the first Elizabethan sonnet cycle, and Arcadia, a heroic prose romance. He was also known for his literary criticism, known as The Defense of Poesy. Although he shared his writing with his close friends, he did not allow his work to be published during his lifetime.

In 1585, Sidney was appointed governor of the Dutch town of Flushing. He fought in a battle against the Spanish at Zutphen in 1586 and died of his wounds several days later. He was buried at St. Paul’s Cathedral in London on February 16, 1587.