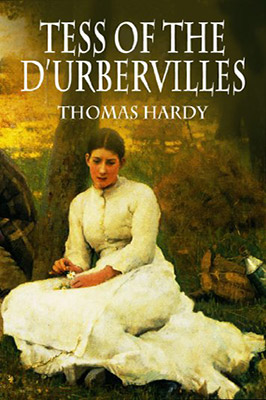 Contents of Tess of the D’Urbervilles

Explanatory Note to the First Edition

The main portion of the following story appeared—with slight modifications—in the Graphic newspaper; other chapters, more especially addressed to adult readers, in the Fortnightly Review and the National Observer, as episodic sketches. My thanks are tendered to the editors and proprietors of those periodicals for enabling me now to piece the trunk and limbs of the novel together, and print it complete, as originally written two years ago.

I will just add that the story is sent out in all sincerity of purpose, as an attempt to give artistic form to a true sequence of things; and in respect of the book’s opinions and sentiments, I would ask any too genteel reader, who cannot endure to have said what everybody nowadays thinks and feels, to remember a well-worn sentence of St. Jerome’s: If an offense come out of the truth, better it is that the offense come than that the truth be concealed.

Author’s Preface to the Fifth and Later Editions

This novel being one wherein the great campaign of the heroine begins after an event in her experience which has usually been treated as fatal to her part of protagonist, or at least as the virtual ending of her enterprises and hopes, it was quite contrary to avowed conventions that the public should welcome the book and agree with me in holding that there was something more to be said in fiction than had been said about the shaded side of a well-known catastrophe. But the responsive spirit in which Tess of the d’Urbervilles has been received by the readers of England and America would seem to prove that the plan of laying down a story on the lines of tacit opinion, instead of making it to square with the merely vocal formulae of society, is not altogether a wrong one, even when exemplified in so unequal and partial an achievement as the present. For this responsiveness I cannot refrain from expressing my thanks; and my regret is that, in a world where one so often hungers in vain for friendship, where even not to be wilfully misunderstood is felt as a kindness, I shall never meet in person these appreciative readers, male and female, and shake them by the hand.

I include amongst them the reviewers—by far the majority—who have so generously welcomed the tale. Their words show that they, like the others, have only too largely repaired my defects of narration by their own imaginative intuition.

Nevertheless, though the novel was intended to be neither didactic nor aggressive, but in the scenic parts to be representative simply and in the contemplative to be oftener charged with impressions than with convictions, there have been objectors both to the matter and to the rendering.

The more austere of these maintain a conscientious difference of opinion concerning, among other things, subjects fit for art, and reveal an inability to associate the idea of the sub-title adjective with any but the artificial and derivative meaning which has resulted to it from the ordinances of civilization. They ignore the meaning of the word in Nature, together with all aesthetic claims upon it, not to mention the spiritual interpretation afforded by the finest side of their own Christianity. Others dissent on grounds which are intrinsically no more than an assertion that the novel embodies the views of life prevalent at the end of the nineteenth century, and not those of an earlier and simpler generation—an assertion which I can only hope may be well founded. Let me repeat that a novel is an impression, not an argument; and there the matter must rest; as one is reminded by a passage which occurs in the letters of Schiller to Goethe on judges of this class: “They are those who seek only their own ideas in a representation, and prize that which should be as higher than what is. The cause of the dispute, therefore, lies in the very first principles, and it would be utterly impossible to come to an understanding with them.” And again: “As soon as I observe that any one, when judging of poetical representations, considers anything more important than the inner Necessity and Truth, I have done with him.”

In the introductory words to the first edition I suggested the possible advent of the genteel person who would not be able to endure something or other in these pages. That person duly appeared among the aforesaid objectors. In one case he felt upset that it was not possible for him to read the book through three times, owing to my not having made that critical effort which “alone can prove the salvation of such an one.” In another, he objected to such vulgar articles as the Devil’s pitchfork, a lodging-house carving-knife, and a shame-bought parasol, appearing in a respectable story. In another place he was a gentleman who turned Christian for half-an-hour the better to express his grief that a disrespectful phrase about the Immortals should have been used; though the same innate gentility compelled him to excuse the author in words of pity that one cannot be too thankful for: “He does but give us of his best.” I can assure this great critic that to exclaim illogically against the gods, singular or plural, is not such an original sin of mine as he seems to imagine. True, it may have some local originality; though if Shakespeare were an authority on history, which perhaps he is not, I could show that the sin was introduced into Wessex as early as the Heptarchy itself. Says Glo’ster in Lear, otherwise Ina, king of that country:

As flies to wanton boys are we to the gods;
They kill us for their sport.

The remaining two or three manipulators of Tess were of the predetermined sort whom most writers and readers would gladly forget; professed literary boxers, who put on their convictions for the occasion; modern “Hammers of Heretics”; sworn Discouragers, ever on the watch to prevent the tentative half-success from becoming the whole success later on; who pervert plain meanings, and grow personal under the name of practising the great historical method. However, they may have causes to advance, privileges to guard, traditions to keep going; some of which a mere tale-teller, who writes down how the things of the world strike him, without any ulterior intentions whatever, has overlooked, and may by pure inadvertence have run foul of when in the least aggressive mood. Perhaps some passing perception, the outcome of a dream hour, would, if generally acted on, cause such an assailant considerable inconvenience with respect to position, interests, family, servant, ox, ass, neighbour, or neighbour’s wife. He therefore valiantly hides his personality behind a publisher’s shutters, and cries “Shame!” So densely is the world with any shifting of positions, even the best warranted advance, galls somebody’s kibe. Such shiftings often begin in sentiment, and such sentiment sometimes begins in a novel.

The foregoing remarks were written during the early career of this story, when a spirited public and private criticism of its points was still fresh to the feelings. The pages are allowed to stand for what they are worth, as something once said; but probably they would not have been written now. Even in the first short time which has elapsed since the book was first published, some of the critics who have provoked the reply have “gone down into silence,” as if to remind one of the infinite unimportance of both their say and mine.

The present edition of this novel contains a few pages that have never appeared in any previous edition. When the detached episodes were collected as stated in the preface of 1891, these pages were overlooked, though they were in the original manuscript. They occur in Chapter X.

Respecting the sub-title, to which allusion was made above, I may add that it was appended at the last moment, after reading the final proofs, as being the estimate left in a candid mind of the heroine’s character—an estimate that nobody would be likely to dispute. It was disputed more than anything else in the book. Melius fuerat non scibere. But there it stands.

The novel was first published complete, in three volumes, in November, 1891.