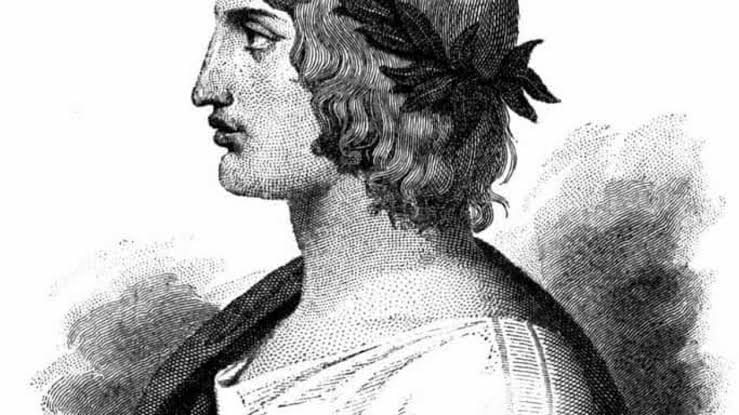 On October 15, 70 B.C.E. Publius Vergilius Maro, known in English as Virgil or Vergil, was born in the farming village of Andes, near Mantua, in northern Italy. Not considered citizens of Rome until 49 B.C.E., when Julius Caesar expanded citizenship to include men living north of the Po River, Virgil and his father were nearly displaced from their land after Caesar’s assassination in 44 B.C.E., when Octavian, Caesar’s adopted son and sole heir, confiscated much of the land in the territory in order to reward army veterans.

Influenced by the greek poet Theocritus, Virgil composed his first major work, the Eclogues (also called the Bucolics), using Homeric hexameter lines to explore pastoral rather than epic themes. The poem reflected the sorrows of the times, and exhibited rhythmic control and elegance superior to that of Virgil’s successors. Published in 39 to 38 B.C.E., the Eclogues were an immediate success, and received the attention of Asinius Pollio, who introduced the poet to Octavian and secured for him an education in Milan, Rome, and Naples.

Continuing in the pastoral tradition, Virgil spent seven years writing his next great work, the Georgics—a poem John Dryden called “the best Poem by the best Poet.” More than two thousand lines long, and divided into four books, the Georgics were modeled after Hesiod’s Works and Days, and praise the experiences of farm life. The poem was written at the request of Maecenas, another patron of the arts, and was first read to Octavian in 29 B.C.E., less than a year after the suicides of Antony and Cleopatra which left Octavian the sole ruler of the Roman world.

In the third book of the Georgics, Virgil foreshadows his next and greatest work, the Aeneid: “Yet soon I will gird myself to celebrate / The fiery fights of Caesar, make his name / Live in the future . . .” Virgil spent the next several years working on what became the national epic of the Roman Empire, borrowing both characters and narrative elements from the Homeric epics in his telling of how the Trojan hero Aeneas became the ancestor of the Romans.

Before the work was finished, however, Virgil decided to travel to Greece in 19 B.C.E. During his travels, he met with Octavian (who had since been given the title Augustus) who convinced Virgil to return with him to Italy. On their way from Athens to Corinth, Virgil caught a fever which grew increasingly severe during their voyage. Virgil died on September 21 and was buried near Naples.

Before his death, Virgil reportedly commanded his literary executors to destroy the unfinished manuscript of his masterwork, but Augustus used his power to ensure the epic’s safety, and the Aeneid went on to become a popular textbook in Roman and later medieval schools.

After the collapse of the Roman empire, scholars continued to see the value of Virgil’s talents, and the Aeneid lasted as the central Latin literary text. He also found an increasing audience of Christian readers drawn both to his depiction of the founding of the Holy City and to a passage in the fourth Eclogue which was interpreted to be a prophecy of Christ. Much later, Virgil’s epic was one of the bases for Dante Alighieri‘s own masterwork, The Divine Comedy, documenting a journey through hell, during which the character of Virgil acts as a guide.

In addition to his poetry, the sequence of Virgil’s career also influenced countless poets who progressed from pastorals to more ambitious epics. This pattern is prominent in the careers of Spenser and Pope and traceable in others, such as Milton and Wordsworth.