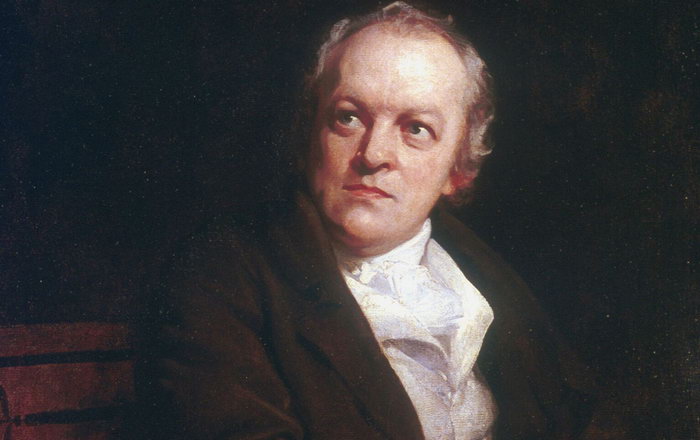 William Blake was born in London on November 28, 1757, to James, a hosier, and Catherine Blake. Two of his six siblings died in infancy. From early childhood, Blake spoke of having visions—at four he saw God “put his head to the window”; around age nine, while walking through the countryside, he saw a tree filled with angels. Although his parents tried to discourage him from “lying,” they did observe that he was different from his peers and did not force him to attend conventional school. He learned to read and write at home. At age ten, Blake expressed a wish to become a painter, so his parents sent him to drawing school. Two years later, Blake began writing poetry. When he turned fourteen, he apprenticed with an engraver because art school proved too costly. One of Blake’s assignments as apprentice was to sketch the tombs at Westminster Abbey, exposing him to a variety of Gothic styles from which he would draw inspiration throughout his career. After his seven-year term ended, he studied briefly at the Royal Academy.

In 1782, he married an illiterate woman named Catherine Boucher. Blake taught her to read and to write, and also instructed her in draftsmanship. Later, she helped him print the illuminated poetry for which he is remembered today; the couple had no children. In 1784 he set up a printshop with a friend and former fellow apprentice, James Parker, but this venture failed after several years. For the remainder of his life, Blake made a meager living as an engraver and illustrator for books and magazines. In addition to his wife, Blake also began training his younger brother Robert in drawing, painting, and engraving. Robert fell ill during the winter of 1787 and succumbed, probably to consumption. As Robert died, Blake saw his brother’s spirit rise up through the ceiling, “clapping its hands for joy.” He believed that Robert’s spirit continued to visit him and later claimed that in a dream Robert taught him the printing method that he used in Songs of Innocence and other “illuminated” works.

Blake’s first printed work, Poetical Sketches (1783), is a collection of apprentice verse, mostly imitating classical models. The poems protest against war, tyranny, and King George III’s treatment of the American colonies. He published his most popular collection, Songs of Innocence, in 1789 and followed it, in 1794, with Songs of Experience. Some readers interpret Songs of Innocence in a straightforward fashion, considering it primarily a children’s book, but others have found hints at parody or critique in its seemingly naive and simple lyrics. Both books of Songs were printed in an illustrated format reminiscent of illuminated manuscripts. The text and illustrations were printed from copper plates, and each picture was finished by hand in watercolors.

Blake was a nonconformist who associated with some of the leading radical thinkers of his day, such as Thomas Paine and Mary Wollstonecraft. In defiance of 18th-century neoclassical conventions, he privileged imagination over reason in the creation of both his poetry and images, asserting that ideal forms should be constructed not from observations of nature but from inner visions. He declared in one poem, “I must create a system or be enslaved by another man’s.” Works such as “The French Revolution” (1791), “America, a Prophecy” (1793), “Visions of the Daughters of Albion” (1793), and “Europe, a Prophecy” (1794) express his opposition to the English monarchy, and to 18th-century political and social tyranny in general. Theological tyranny is the subject of The Book of Urizen (1794). In the prose work The Marriage of Heaven and Hell (1790-93), he satirized oppressive authority in church and state, as well as the works of Emanuel Swedenborg, a Swedish philosopher whose ideas once attracted his interest.

In 1800 Blake moved to the seacoast town of Felpham, where he lived and worked until 1803 under the patronage of William Hayley. He taught himself Greek, Latin, Hebrew, and Italian, so that he could read classical works in their original language. In Felpham he experienced profound spiritual insights that prepared him for his mature work, the great visionary epics written and etched between about 1804 and 1820. Milton (1804-08), Vala, or The Four Zoas (1797; rewritten after 1800), and Jerusalem (1804-20) have neither traditional plot, characters, rhyme, nor meter. They envision a new and higher kind of innocence, the human spirit triumphant over reason.

Blake believed that his poetry could be read and understood by common people, but he was determined not to sacrifice his vision in order to become popular. In 1808 he exhibited some of his watercolors at the Royal Academy, and in May of 1809 he exhibited his works at his brother James’s house. Some of those who saw the exhibit praised Blake’s artistry, but others thought the paintings “hideous” and more than a few called him insane. Blake’s poetry was not well known by the general public, but he was mentioned in A Biographical Dictionary of the Living Authors of Great Britain and Ireland, published in 1816. Samuel Taylor Coleridge, who had been lent a copy of Songs of Innocence and of Experience, considered Blake a “man of Genius,” and Wordsworth made his own copies of several songs. Charles Lamb sent a copy of “The Chimney Sweeper” from Songs of Innocence to James Montgomery for his Chimney-Sweeper’s Friend, and Climbing Boys’ Album (1824), and Robert Southey (who, like Wordsworth, considered Blake insane) attended Blake’s exhibition and included the “Mad Song” from Poetical Sketches in his miscellany, The Doctor (1834-1837).

Blake’s final years, spent in great poverty, were cheered by the admiring friendship of a group of younger artists who called themselves “the Ancients.” In 1818 he met John Linnell, a young artist who helped him financially and also helped to create new interest in his work. It was Linnell who, in 1825, commissioned him to design illustrations for Dante‘s Divine Comedy, the cycle of drawings that Blake worked on until his death in 1827.