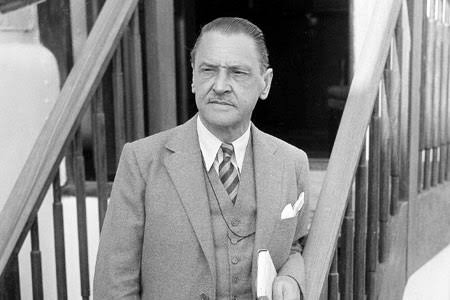 September 1997 marked the 100th anniversary of the publication of W. Somerset Maugham’s first novel, Liza of Lambeth. Written during his final year of medical school, the realistic novel draws upon his experiences in treating patients from the Lambeth slums of London. The book achieved modest public acclaim—even notoriety—sufficient, in fact, for Maugham to abandon his medical career to become a full-time writer. A year after his publishing debut, he left London for Capri in Italy, beginning a lifelong pattern of travel and story-telling that became the Maugham persona for millions of readers. Over the next 60 years, he became one of the most successful writers of all time.

When Maugham was born—in the British Embassy in Paris in 1874—he was destined to become a lawyer. His father and grandfather had been prominent attorneys, and his oldest brother went on to become England’s Lord Chancellor. However, Maugham had a severe stammer, which left him afraid to speak; so there were no plans for him to following the family tradition. Furthermore, he was orphaned by the age of 10 and was sent to England to be raised by an uncle, a clergyman. These circumstances led the young Maugham to be shy and withdrawn; consequently he became an observer rather than an active participant, but he was able to turn this to his advantage as a writer. The unhappiness and anxiety of his early life were recounted in his autobiographical novel, Of Human Bondage (1915), in which his stammer became a deformed foot for the protagonist.

It is not widely known today that Maugham realized his first major success not as a novelist or short story writer but as a playwright. After Liza of Lambeth, he spent 10 years turning out unsuccessful novels, short stories, and plays. An admirer of Ibsen, he wanted to write dramas confronting social issues of the day. His first produced play, A Man of Honour (1903), a starkly realistic drama of the consequences of misguided virtue, had little success. This play’s distinction today is for the collector, and Maugham later referred to it as his scarcest work. The most readable novel from this early period is probably Mrs.Craddock (1902), with its theme of a woman’s liberation from traditional Victorian society. The Magician (1908) is based on mystic Aleister Crowley. Maugham and Crowley had met and taken an instant dislike to each other. In Crowley’s The Diary of a Drug Fiend he refers to Maugham’s portrayal of him as “malignant.”

However in 1907, Maugham achieved the fame and success that he had worked for. Since his early writing was described by critics as gloomy and depressing, he tried his hand at lighter social themes.Lady Frederick (1907), the story of a high society lady who tries to discourage a persistent young suitor, was an instant success with a long run in London’s West End. By 1908, he had four plays running simultaneously in London. With the exception of Of Human Bondage, Maugham did not return to writing novels or short stories for more than 10 years. He became a man-about-town, the successful, rich, and witty satirist of British society.

In 1917 Maugham took the first of many long trips to the Pacific Islands and the Far East, which resulted in some of his finest writing. The first of these stories was The Moon and Sixpence (1919), a novel based on the life of Gauguin. He wrote highly readable travel books—On a Chinese Screen (1923) and The Gentleman in the Parlour (1930)—and several collections of short stories. The Trembling of a Leaf (1923) contained his most recognized story, “Rain,” and The Casuarina Tree (1926) is one of the “Connolly 100.” Maugham continued to write successful plays, at least one, The Letter (1927), with a Far East setting. He returned to social criticism with more success—and more controversy—than earlier in his career with dramas such as The Unknown (1920), The Sacred Flame (1928), and For Services Rendered (1932). His last play Sheppey, was written in 1933. Maugham published Ashenden in 1928, a group of short stories based on his experience as a British espionage agent during World War I. For the first time, a spy was portrayed as gentlemanly, sophisticated, and aloof. Ian Fleming, later a friend of Maugham, said that Ashenden influenced his own writing of spy stories.

Sometimes Maugham’s stories were thinly disguised episodes involving his host or others he had met on his travels—circumstances that occasionally resulted in threats and lawsuits. The Painted Veil(1925) was revised at least twice to eliminate references to people still living in Hong Kong, and the various issues of this book remain of great interest to Maugham collectors. Wilmon Menard, an American writer, followed Maugham’s footsteps throughout the Far East, interviewing those who had known and entertained Maugham. Menard’s book, The Two Worlds of Somerset Maugham(1965), makes interesting reading.

In 1927, Maugham left England amid scandal and moved to France, where he spent the rest of his life. Although he had married the popular Syrie Wellcome, Maugham throughout his marriage (and known to his wife) had maintained a relationship with an American man, Gerald Haxton. By 1927, the situation had become intolerable to Syrie, and they were divorced. Maugham bought a villa in Cap Ferat on the French Riviera, and Haxton, who had been deported from England, joined him there. Maugham enjoyed a royal lifestyle at the Villa Mauresque, and an invitation by Maugham to spend a few weeks there was highly prized by the literary and social elite. In spite of his relocation, he continued his disciplined habit of writing several hours every morning and his love of travel.

Maugham visited Chicago several times and once gave a lecture at the University of Chicago. His former wife, Syrie, was a very successful interior designer and had a studio on Michigan Avenue in the 1920s. Several of Maugham’s stories have Chicago settings, including his last successful novel, The Razors Edge(1944), which continues to appeal to new generations of readers.

During World War II, Maugham lived in the United States and became a popular figure in Hollywood. Many of his stories and plays have been—and continue to be—made into motion pictures. “Rain” was filmed three times with Sadie Thompson first portrayed by Gloria Swanson, then by Joan Crawford, and finally by Rita Hayworth. After the war, Maugham returned to the Villa Mauresque, where he continued to write and entertain the rich and famous. He died in 1965 at the age of 91. The Maugham persona of the sophisticated world traveler and story teller, rather than the social dramatist, is his legacy.