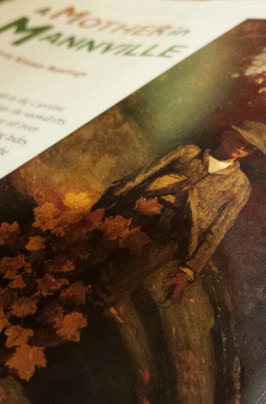 The orphanage is high in the Carolina mountains. Sometimes in winter the snowdrifts are so deep that the institution is cut off from the village below, from all the world. Fog hides the mountain peaks, the snow swirls down the valleys, and a wind blows so bitterly that the orphanage boys who take the milk twice daily to the baby cottage reach the door with fingers stiff in an agony of numbness.

“Or when we carry trays from the cookhouse for the ones that are sick,” Jerry said, “we get our faces frostbit, because we can’t put our hands over them. I have gloves,” he added. “Some of the boys don’t have any.”
He liked the late spring, he said. The rhododendron was in bloom, a carpet of color, across the mountainsides, soft as the May winds that stirred the hemlocks. He called it laurel.

“It’s pretty when the laurel blooms,” he said. “Some of it’s pink and some of it’s white.”
I was there in the autumn. I wanted quiet, isolation, to do some troublesome writing. I wanted mountain air to blow out the malaria from too long a time in the subtropics. I was homesick, too, for the flaming of maples in October, and for corn shocks and pumpkins and black-walnut trees and the lift of hills. I found them all, living in a cabin that belonged to the orphanage, half a mile beyond the orphanage farm. When I took the cabin, I asked for a boy or man to come and chop wood for the fireplace. The first few days were warm, I found what wood I needed about the cabin, no one came, and I forgot the order.