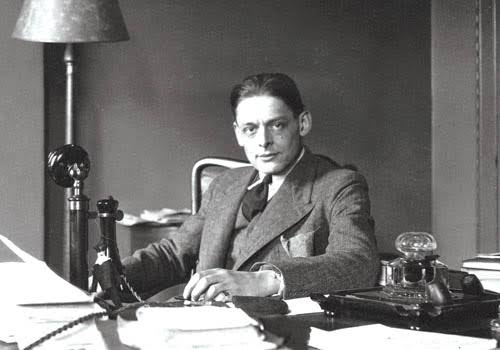 After a year in Paris, Thomas Stearns Eliot returned to Harvard to pursue a doctorate in philosophy, but returned to Europe and settled in England in 1914. The following year, he married Vivienne Haigh-Wood and began working in London, first as a teacher, and later for Lloyd’s Bank.

It was in London that Eliot came under the influence of his contemporary Ezra Pound, who recognized his poetic genius at once, and assisted in the publication of his work in a number of magazines, most notably “The Love Song of J. Alfred Prufrock” in Poetry in 1915. His first book of poems, Prufrock and Other Observations, was published in 1917, and immediately established him as a leading poet of the avant-garde. With the publication of The Waste Land in 1922, now considered by many to be the single most influential poetic work of the twentieth century, Eliot’s reputation began to grow to nearly mythic proportions; by 1930, and for the next thirty years, he was the most dominant figure in poetry and literary criticism in the English-speaking world.

As a poet, he transmuted his affinity for the English metaphysical poets of the seventeenth century (most notably John Donne) and the nineteenth century French symbolist poets (including Baudelaire and Laforgue) into radical innovations in poetic technique and subject matter. His poems in many respects articulated the disillusionment of a younger post–World War I generation with the values and conventions—both literary and social—of the Victorian era. As a critic also, he had an enormous impact on contemporary literary taste, propounding views that, after his conversion to orthodox Christianity in the late thirties, were increasingly based in social and religious conservatism. His major later poetry collections include Ash Wednesday (1930) and Four Quartets (1943); his books of literary and social criticism include The Sacred Wood (1920), The Use of Poetry and the Use of Criticism (1933), After Strange Gods (1934), and Notes Towards the Definition of Culture (1940). Eliot was also an important playwright, whose verse dramas include Murder in the Cathedral, The Family Reunion, and The Cocktail Party.

He became a British citizen in 1927; long associated with the publishing house of Faber & Faber, he published many younger poets, and eventually became director of the firm. After a notoriously unhappy first marriage, Eliot separated from his first wife in 1933, and remarried Valerie Fletcher in 1956. T. S. Eliot received the Nobel Prize for Literature in 1948. He died in London on Janurary 4, 1965.